meson is Yet Another Build System (YABS). One of it’s aims is to be easier to use than the other YABS. Maybe it is maybe it isn’t.

I have been using Clion (I had a JetBrains subscription for a couple of years but I’m not a developer so I could not justify spending money on a subscription. So I have a fallback version from 2017. I like the debugging support in Clion, like being able to open objects in memory using a mouse when the program is paused.

Now I want to add a GTK UI for my program as I want to be able to interact with a graph to inform a big block of data to work in the program. For some reason (to do with CMAKE, a YABS, probably) it won’t compile a GTK program. My least favourite programming task is chasing around dependencies and interacting with YABS and I never learnt CMAKE enough to make it muscle memory, or something that’s integrated into my mind. It’s currently something I’ll always have to look up (because I’m not a programmer).

GTK (a widget tool-kit kind of thing) is also something I don’t know how to use so I thought I’d mock something up in Gnome-Builder. and then integrate it into the program I’m writing later by which time CMAKE will have magically come into focus. Default Gnome-Builder can indeed use complex templates to build Hello World programs (which it then insists on making into a Flatpak) and have loads of “hey look this is how you should write this code” templates, but I want something very simple.

Then in meson.build in the folder add

add this to the Deps square brackets

Wait how did you know to use dependency(‘gtk4’)? use pkgconf –list-all | grep gtk to show you all the packages you can use as dependecies (that have gtk in them).

Find mp3 files containing the word fish in the filename, ‘below’ current older

Use Grep to find a string within a file, and don’t return the filename only the examples and then find only the distinct examples.

This example was to help me remember the name of a library I had used somewhere in one of my .R files but I couldn’t remember which one etc. the library I was looking for was called “tabplot”

I know, complicated isn’t it.

I was having problems with tracker miner beavering away for 1/4 of an hour every time I booted up. Had a look at the journalctl output etc and noticed errors around the database.

So I Duck Duck Go-ed some stuff and eventually found:

Once I ran that and rebooted, it ran again for a bit then settled down again. Problem solved.

search for Execute Selection in Python Console, to find and/or change your keyboard combination.

I was using Kdevelop under Gnome on Fedora 33 and wanted to debug a program. Unfortunately the above error pops up telling me it won’t work I need GDB version > 7 but all I have is GDB version 10, and any fool knows 10 < 7 so what’s a guy to do?

So I thought I’d try LLDB instead (Run -> Launch Configurations -> Debug) but that gave an error of can’t find lldb-mi. So more ducking (DDG) later I found a bug report from Arch (if only I was linux enough for Arch) that stated that LLDB-mi no longer comes with LLDB install and you had to build it from source.

then downloaded the repo from https://github.com/lldb-tools/lldb-mi

Not sure what’s up with GDB but I’m sure it’ll be sorted at a later date. It was after an update that it started falling over.

But once I ran:

Just bought a VHF radio with GPS logging (see title). I had assumed that when you connected a computer to it as a USB device it would be just like a thumb drive. Unfortunately that wasn’t the case.
You can download some special software for PC download (sic) but that doesn’t include Mac or the mighty Linux. So some DDGing later brought me to https://github.com/cr/hx870 which uses python to access it.
It was easy to set up a virtual environment for python 3.6 and use pip to install from the github repo.
You can make sure it is connected to USB, using… lsusb it should show an entry for a device called Yaesu Musen HX890

Then use:
hxtool gpslog -g yourfilenamehere.gpx or (-j for geojson format)
…to transfer you GPS log from the device to your PC.

By the way to access the setup menu (just in case you haven’t read the manual) hold down the menu/set button for a second or two instead of just tapping it. You clear the log by using the GPS settings menu. 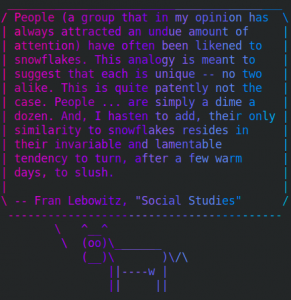 Having given up on people telling me what I don’t want (GNOME). KDE is now the GUI of choice.
An install of fedora KDE spin and here are my initial installs:

Don’t forget you’ll also want to install RStudio,etc. and make the adjustments to your .bashrc file for the powerline to work.
…and you know what did it for me? Desktop backgrounds.